Future of EU Defence manufacturing: trade unions insist on a seat at the table 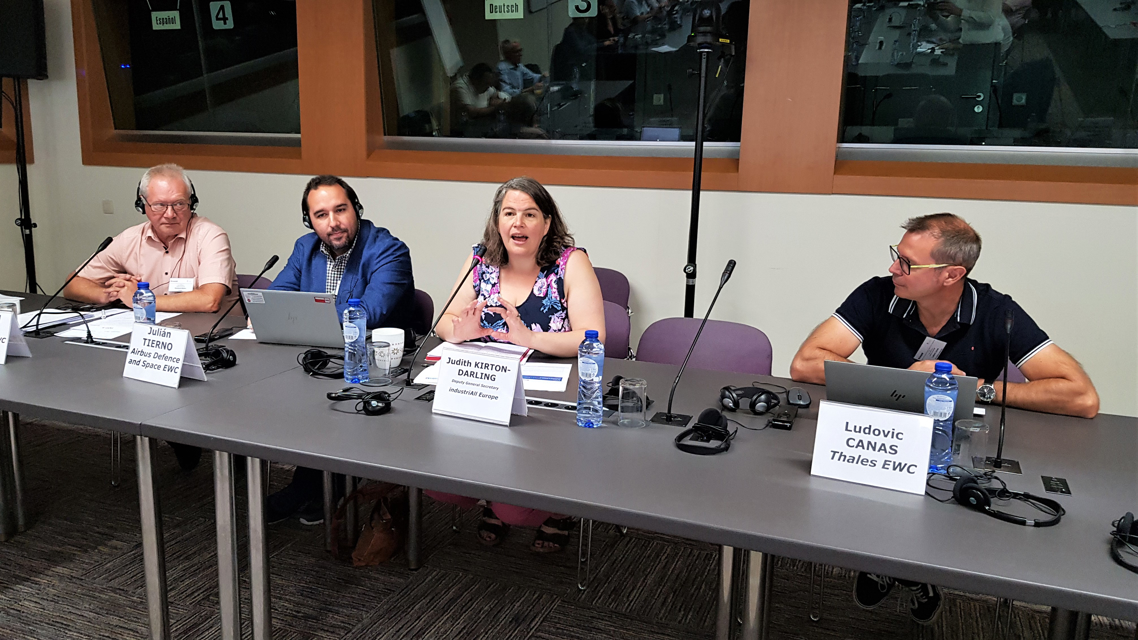 Trade unions meet in Brussels to mark the end of a two-year EU funded project looking at changes in defence manufacturing in Europe and the impact on the workforce. As well as meeting with officials from the European Commission, European Parliament, European industry and NATO, trade unions plan to come forward with a declaration setting out core trade union demands to ensure a sustainable future EU defence sector with good quality and highly-skilled jobs.

anticipation of industrial change in the European defence industries

The project, undertaken with Syndex and wmp consult, focused on the anticipation of industrial change in the European defence industries. The final conference was attended by more than 40 trade union representatives from 9 countries and followed in-depth studies and a number of national subsector workshops and manufacturing site visits across Europe which helped shed light on the future transformations required for certain companies and the role that workers, and their representatives, can play in these transformations.

The final conference provided an opportunity to both present the results of the study and to engage with key stakeholders including the European Commission, the European Parliament, NATO, industry and academia on the future of the sector.

With the terrible invasion of Ukraine sadly still ongoing, the participants again underlined the solidarity between European trade unions and the people of Ukraine people and called upon Russia to end the war immediately.

The impact of the war in Ukraine and the subsequent sanctions highlighted the need for a more resilient European defence industrial base, which was a theme throughout the conference. Participants stressed that EU dependencies on critical raw materials, preliminary products, and infrastructure need to be reduced to ensure that the industrial activities do not come under threat. Furthermore, better coordination of the demand for armaments in Europe is needed with joint orders and acquisitions potentially helping to improve the cost efficiency of public spending. Finally, participants stressed the need for joint technological solutions to increase the interoperability of the European armed forces and to provide the European industry with planning security.

Trade unions stressed that the absence of a true European defence market puts the industry and workers under pressure, noting that company strategies that focus exclusively on global exports are not acceptable. Participants called for a decisive and reliable European industrial strategy that provides for planning security supported by long-term budgets. This is essential to for strategic development including in employment planning and R&D which could increase the sustainability of the sector in Europe and beyond.

“For the environmentalist that I am, the defence industry is not an industry like any other. On the other hand, its employees are like any other and should have the same rights,” said MEP Mounir Satouri, who is a member of the European Parliament’s Subcommittee on Security and Defence. He underlined that workers need to be part of the debate – and that they must be involved in discussions on industrial change.

Isabelle Barthès, industriAll Europe Deputy General Secretary, added: “The European defence industry must, as a priority, produce for European customers and friendly democratic countries, and not depend on global exports. However, this requires a detailed sectoral industrial strategy to allow for planning security for workers and companies alike. This strategy must be developed involving all stakeholders along the value chain, including sectoral partners at all levels.”