The European Green Deal must be social 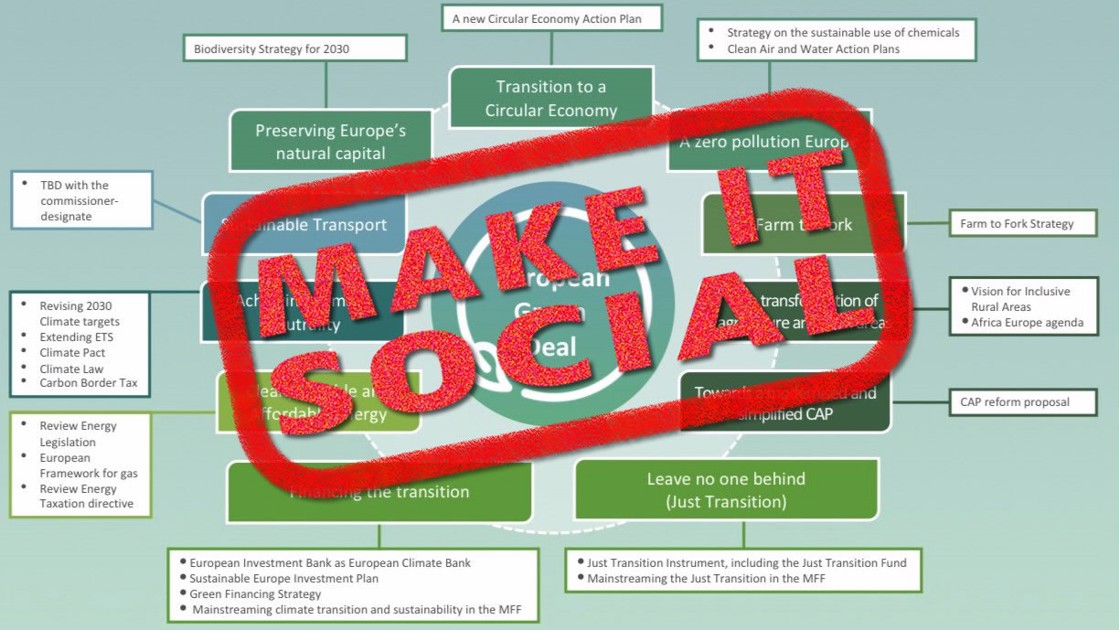 Making the Green Deal social will be a crucial factor for its acceptance by working men and women.

IndustriAll European trade union has today released the following press release at the occasion of the presentation of the European Green Deal by the European Commission.

IndustriAll European trade union, representing 7 million workers in mining, energy and manufacturing industries all over Europe, stresses again that a strong social dimension within the European Green Deal presented today will be a crucial factor for its acceptance.

Social fairness and inclusiveness have been presented as key guiding principles of the European Green Deal and specific proposals will be released in the coming weeks, with a 'Just Transition Mechanism' to support regions that are most exposed to the decarbonisation challenge.

"We are satisfied that the relentless calls of trade unions have led to the adoption of 'just transition' as a guiding principle for a successful transition. After years of discussion, we will now have a European instrument supporting regions depending on fossil fuels and the many workers who still live from carbon intensive activities" said Luc Triangle, General Secretary of industriAll Europe. "This is a step in the right direction, but we have to be clear that the industrial transformation of these regions will require sustained investment and certainly more than the announced amount available for the Just Transition Mechanism".

The proposed Green Deal rightly stresses the importance of the European industrial strategy overall. The manufacturing industry, including energy-intensive industries or the automotive industry, is crucial for the EU’s future. Investing to transform and strengthen integrated industrial value chains to maintain and create good jobs in Europe, and protecting against carbon leakage, must be at the core of the EU's approach to fight climate change. “Industry is the backbone of our economy and the EU should ensure its transformation through investment and technological innovation, while protecting it from unfair competition. Workers will not accept policies that lead to offshoring the EU industry and related jobs to countries where climate policies are much weaker or don’t even exist” warns Luc Triangle.

As trade unions, we know that workers will only support the Green Deal if the Green Deal delivers robust answers to the challenges they are struggling with in their daily lives. Worker participation and social dialogue at all levels are crucial to this end. "Fighting climate change is an urgency for all of us. But with increasing precariousness and whole regions at risk of de-industrialisation, there is also a social crisis across Europe and the EU must resolve this" stressed Luc Triangle. In the same way, measures adopted by the EU should reduce inequalities among regions and among people.

"Expect resistance and rejection from workers if they are squeezed between the fear of losing their jobs or severe pressures to reduce wages, and policies that make poorer households and the middle class pay the bulk of decarbonisation costs" concluded industriAll Europe's General Secretary.