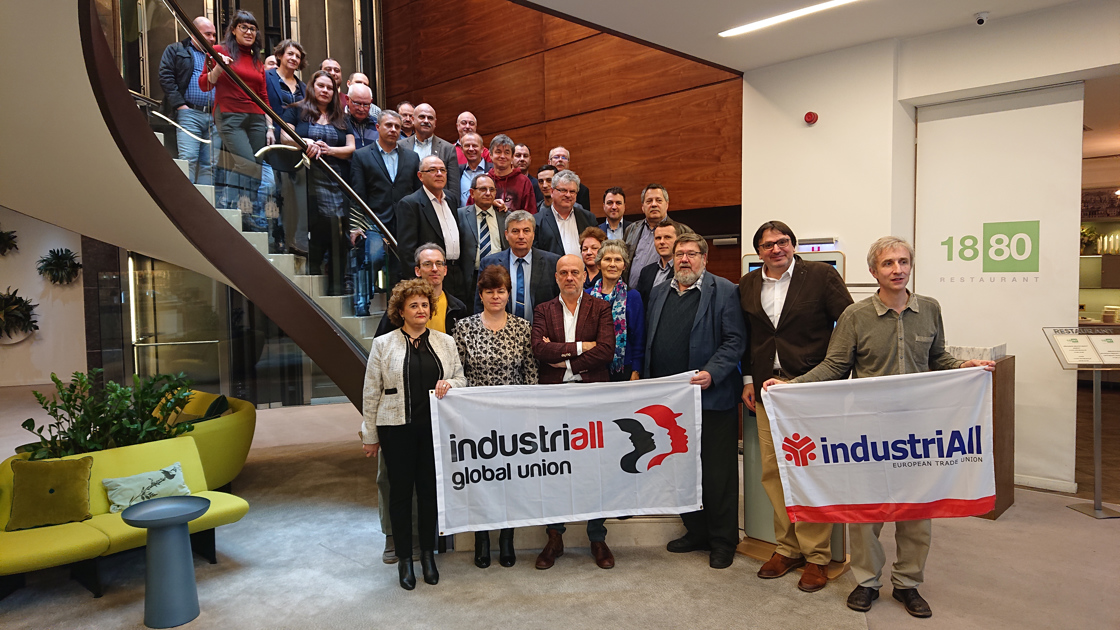 IndustriAll Europe representatives have travelled to Bucharest to meet Romanian unions for talks over how to organise workers to fight back against economic and social hardship despite harsh labour laws and increased deregulation.

“Companies would not behave that way in their home country”

The leaders of two of IndustriAll Europe’s affiliates – Cartel Alfa Confederation president Bogdan Hossu and BNS president Dumitru Costin - opened the meeting on January 21 by setting out the devastating impact of the 2011 amendments to labour legislation, which has undermined unions and eroded their bargaining power.

Work continued with an EU-funded seminar on raising wages and working conditions in the textile industry on January 22 and 23, which was carried out in cooperation with IndustriAll Global. The event saw national and local level representatives of Romanian textile unions debated the road towards an organised workforce with living wages and collective agreements, together with global brands H&M and Inditex, their key suppliers, employer associations and the government.

The meeting came in the same week that new Eurostat figures showed Romania has the higest percentage of young people at risk of poverty than any other EU country.

“There is high potential to build stronger trade unions in Romania," he said. "High levels of trade union membership are the basis for higher wages and better working conditions. We must also strengthen collective bargaining structures in Romania and intensify transnational organising campaigns. This is the way forward to get equal pay for equal work”.

Romania is the biggest textile, garment, leather and footwear producing country in south east Europe with 250,000 workers in almost 10,000 factories. Salaries are close to the national minimum wage of 2080 leis (440 euros) per month. Even though the government has raised the minimum wages in the past years, workers took a big hit in 2017 when social security contributions were moved from the companies to the workers to pay. With a deduction of over 40%, workers are left to cope with a monthly net pay of around 250-300 euros.

Another major problem is the destruction of collection bargaining with the Social Dialogue Law reform in the middle of the economic crisis in 2011, then promoted by the European Commission, European Central Bank (ECB) and the International Monetary Fund (IMF). Thresholds for the right to conclude accords were set so high, that practically no sectoral collective agreements are left. At the company level, 90% of the “agreements” are signed by “worker representatives”, mostly appointed by the employers.

To make things worse, the law requires 15 workers for setting up a trade union. As over 90% of companies have less than 15 employees, about a quarter of the workforce is deprived from the fundamental right of freedom of association, guaranteed in the Romanian Constitution and ILO Convention 87.

The Romanian government and European institutions seem to be changing their views on collective bargaining, having witnessed an increase of inequality and in-work poverty. A difficult process in underway in the Romanian parliament, with a strong business lobby against any changes.

However, represenatives of major employers in the sector, such as H&M, explained how they want to work with unions to achieve good worker-employer relations through collective bargaining.

“We want topromote a sectoral collective agreement, linked with increased productivity. Young people do not want to work in our industry, unless the wages go up, but that requires a focus on high quality production”, said Irina Mihai from the FEPAIUS textile employers’ federation.

“Strong industrial unions are the basis of our bargaining power. We need to rebuild our strength and move towards more unity in Romania. We share many commonalities, there are many issues that affect us all, irrespective of our union membership. This is what holds us together. IndustriAll Global Union together with IndustriAll European Trade Union will continue to provide support to their Romanian affiliates in their struggle for decent wages and living conditions in this country."