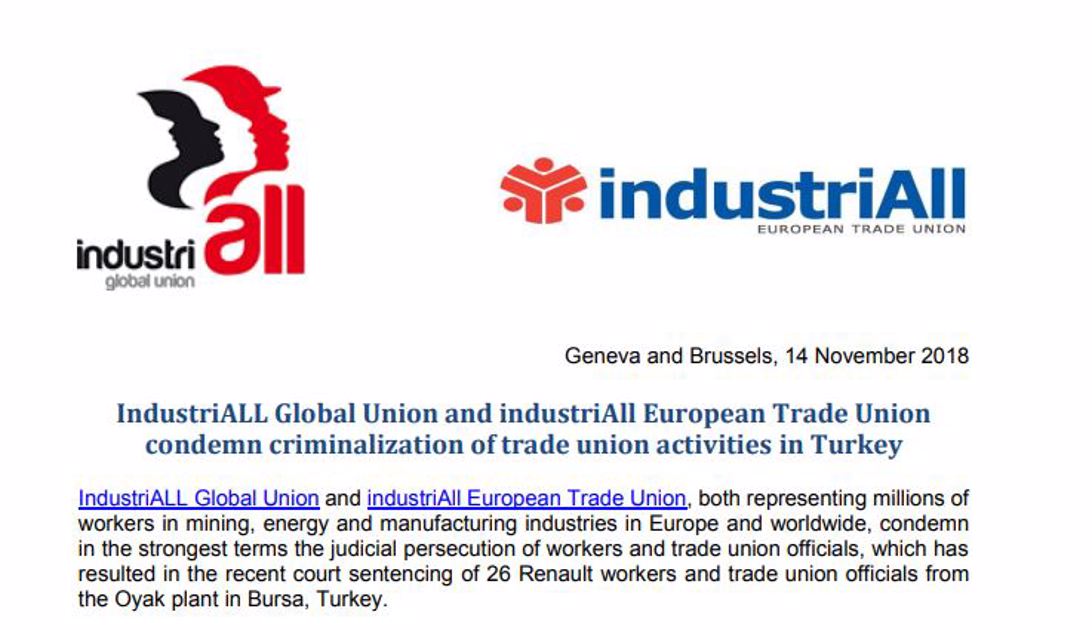 The Government of Turkey, including its judiciary, should stop criminalizing trade union activity. This behaviour constitutes a blatant violation of national and international core labour standards…

The 26 workers have been sentenced to five months in prison suspended for five years. If any of the convicted workers commit a ‘crime’ in that period, they will go to jail.

The workers were found guilty of “disobeying the law on meetings and demonstrations" after taking part in protest in front of Renault’s Oyak plant in March 2016, where they were victims of police brutality and unlawful detention.

“The Government of Turkey, including its judiciary, should stop criminalizing trade union activity. This behaviour constitutes a blatant violation of national and international core labour standards…”

“Even though Renault was not involved in the judicial persecution of the workers, the company bears responsibility for having failed to solve the conflict through social dialogue, and having instead called the police to repress the striking workers in 2016.”

The demonstrators were demanding the right to organize and asking for workers to be reinstated after Renault refused to allow union elections to take place, and had fired ten workers including two worker spokespersons.

“It is important to note that Renault’s behaviour at the Oyak plant was in violation of the Global Framework Agreement signed with us in 2013,” reads the declaration from IndustriALL and industriAll Europe. “Both organizations, along with the concerned affiliates, will keep on calling to address Renault’s unacceptable violation of the Global Framework Agreement.”

Read the full declaration HERE in English and HERE in French