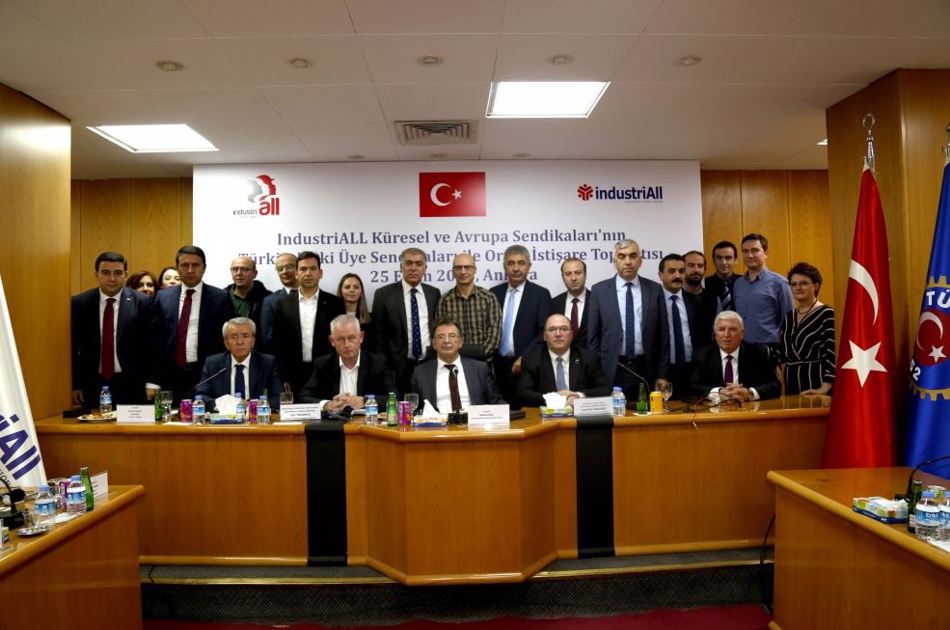 IndustriAll Europe and IndustriALL Global conducted a joint visit to Ankara on October 25 2018, meeting Turkish affiliates to discuss the economic crisis and deliver a strong message of solidarity.

IndustriALL Global and European trade unions are fully committed to continuing to give full support and solidarity to all our Turkish affiliates in your fight for fundamental trade union rights.

One of the world's fastest growing economies over the last decade, Turkey has fallen into the trap of foreign debt fueled growth, bringing the country into deep economic turmoil as deficits in both fiscal and current accounts reach alarming levels. The Turkish government used foreign credit to drive growth through infrastructure and construction investments, the return on which is insufficient to service the debt.

Since Turkey has inadequate hard currency reserves to rescue the economy, the Turkish lira has fallen sharply against major currencies and lost 4 per cent in value since August, and 50 per cent from the beginning of the year. Coupled with a series of political crises, this has resulted in economic fallout that could trigger a harsh crisis in the banking system in the country and other emerging economies, and even in Europe, considering the close economic ties.

Turkey’s main export drivers are the automotive and auto supply sectors, textile and garment industries and petrochemicals, which are organized by IndustriALL affiliates.

In addition, Turkey suffers from tariffs imposed by the US in the steel and aluminum sectors, among others, which impact industrial jobs in manufacturing.

The sharp devaluation of the lira has resulted in a drastic decline in purchasing power for workers. At the beginning of the year, the legal minimum wage was increased from 1,404 to 1,603 lira net, at the time more than €350, now worth less than €200. Turkey’s minimum wage has become lower than neighbouring countries.

Turkish unions are united in demanding a quick fix by increasing the legal minimum wage to 2,000 lira, which remains far from being sufficient for survival.

It is reported that a number of companies have already filed for bankruptcy with the authorities, creating massive job losses without protection.

Turkish affiliates must also fight for the fundamental trade union rights and liberties of workers guaranteed by international conventions and the country’s constitution. There is continous pressure and intimidation against workers and trade unions, particularly when they engage in organizing campaigns and collective bargaining negotiations.

The IndustriALL visit coincided with a major labour dispute regarding the construction of the giant third airport in Istanbul, where 32,000 workers are employed. Since the start of the project, at least 37 workers have died, and workers say the number could be much higher. Workers have reported problems with safety, excessive working time, food and accommodation.

To protest the rising number of fatalities and poor working conditions at the airport construction site, workers went on strike, but security forces were brought out to repress the industrial action. Union officials and members have been arrested and are still in prison. IndustriALL Global and European trade unions joined the international union movement in protesting the situation, writing to the country's President and the construction consortium IGA.

Addressing the meeting, Valter Sanches and Luc Triangle, respective general secretaries of IndustriALL Global and Europe made a statement, saying:

“Our sincere hope and expectation is that Turkey resolves its current hard economic problems without having to turn to international financial agencies, particularly the International Monetary Fund, since their anti-labour austerity policies in the past are still fresh in our memories.

“IndustriALL Global and European trade unions are fully committed to continuing to give full support and solidarity to all our Turkish affiliates in your fight for fundamental trade union rights.

“Both organizations are present here to demonstrate our consistent support to our Turkish affiliates in these difficult times for the workers in the country.”