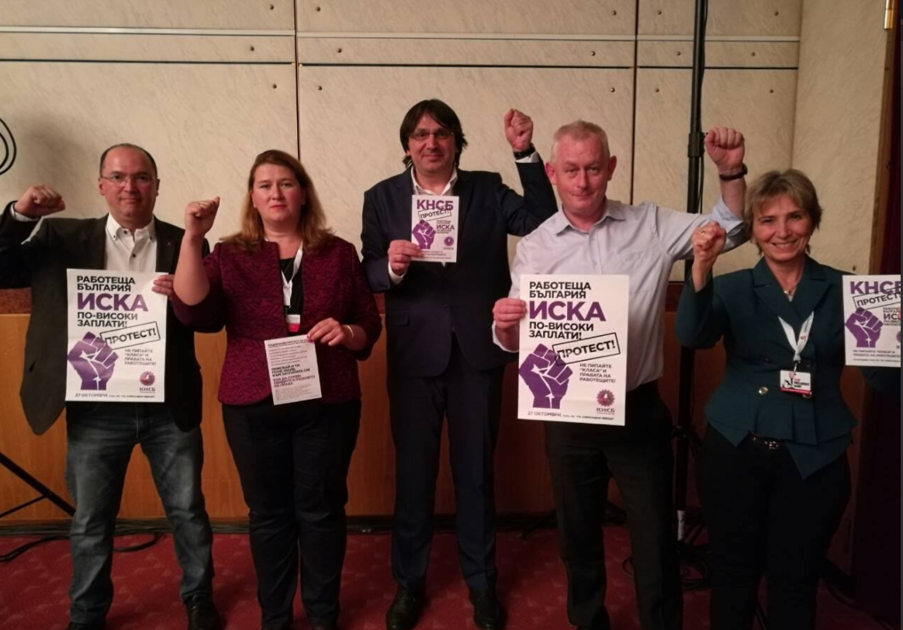 Some 10,000 Bulgarian workers flooded the streets of Sofia on the 27th October demanding decent incomes and workers’ rights. Members from all over the country of our affiliated Bulgarian trade union federations joined the march to the Council of Ministers.

IndustriAll Europe strongly supported its affiliates to call for European upward wages convergence relaying our Congress resolution’s message ‘Equal Pay for Equal work throughout Europe’ and the ongoing Pay Rise Campaign. We need to join forces throughout Europe to shift the negative attitude towards wage increases among the public, policymakers, and businesses. Pay increases are justified, fair and overdue to contribute to our sustainable social and economic future.

Tsvetelina Milchalieva, President of the Light Industry Federation, generated massive solidarity from delegates from all over the world at IndustriALL Global ‘Industry 4.0 Conference’. While at home, backed by workers from all sectors Plamen Dimitrov, CITUB President, handed a declaration to the government and employers.

“Everyone has to get a monthly salary increase of at least 100 BGN (€50) for the current year, irrespective of the sphere they work in: a school, a hospital, in administration, in the mines, in a shop. This is what people want to say today”, said Plamen Dimitrov. In addition, a representative of the textile and clothing industry at the CITUB protest said, “We work for miserable pennies and on top of all that, we do not receive them. Small towns are already depopulated, and people are fleeing abroad.” The protest also focused on defending social benefits.

“We want the Prime Minister’s personal commitment to include our country in the upcoming EU Alliance for upward wage convergence”, announced Plamen Dimitrov. The Czech Republic, Hungary and Slovakia are already there. Bulgaria is about to decide whether it wants Bulgarian wages to match European ones in the next few years, or whether the country will be lagging behind. “We want a solution from Prime Minister Borisov now. Our struggle continues on the road to higher wages”, explained Plamen Dimitrov.

While corporate profits and shareholder value exceed pre-crisis levels, wages have stagnated or declined. A pay rise is necessary to fight precarious jobs, which are often jobs with low and unsecured wages, and in‐work poverty, which has reached an unprecedented level in Europe. Making sure that wages provide workers with a decent living must be an absolute priority. Today, in‐work poverty affects 10% of European workers. European institutions, national governments and European social partners must help social partners, in particular in low-wage Member States to build capacity, establish well-functioning collective bargaining at the sectoral level, and increase their membership and negotiating power.

For industriAll Europe, addressing the wage gap between regions of Europe and especially between eastern and western parts of Europe is a matter of priority. It is no longer acceptable that workers in the same company or sector, doing the same job and performing at similar levels of productivity, but based in different Member States, receive different wages.