Romania: ‘No’ to the full transfer of social security contributions on workers! 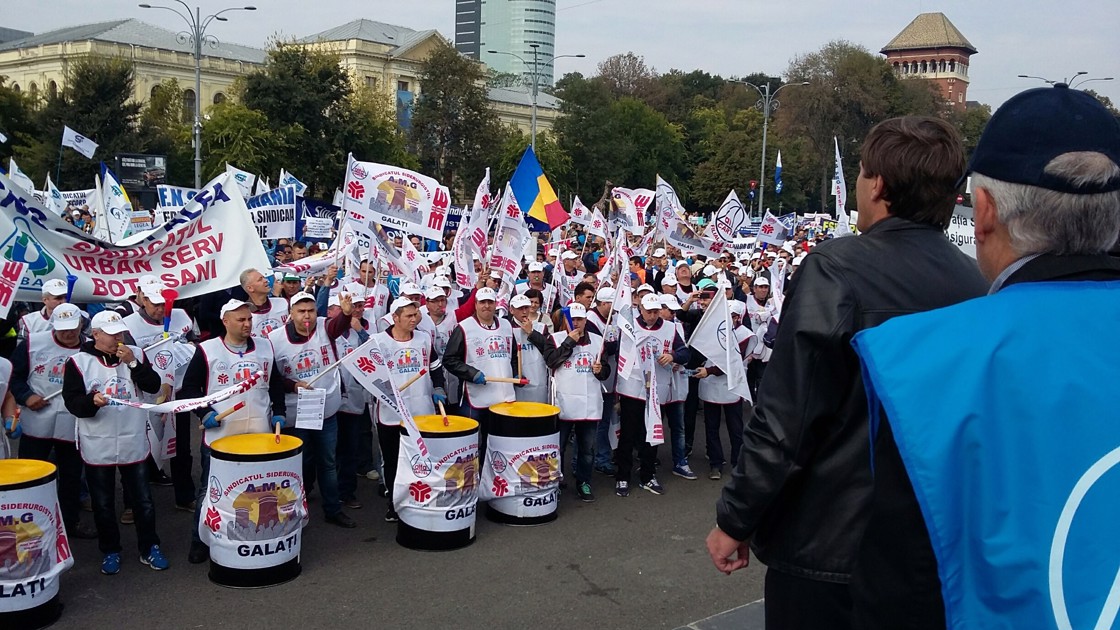 On the 21st September, the Romanian government expressed its intention to fully transfer social security contributions from the employer to the employee. This is the solution put forward by the government to revisit the state budget at the expense of workers, overlooking European and international standards. The Romanian trade union confederations, the ETUC, European trade union federations and industriAll Europe’s trade union affiliates made clear that forcing the burden of social security contributions on workers is unacceptable.

In response to the non-consultation with the social partners and to this reckless proposal, about 7,000 employees and trade unions rallied in Victoria Square in front of the Romanian government headquarters on the 4th October. Prime Minister, Mihai Tudose received a delegation led by the President of CNS Cartel Alfa, Bogdan Iuliu Hossu, as well as representatives from the federations of chemistry and petrochemistry, mines and energy, metallurgy, health, law enforcement and education sectors.

At European level, Romania must comply with the ratified ‘European Code of Social Security’ (9/10/2009) and the ratified ‘European Social Charter on 07/05/1999’. Moreover, a case law of the European Committee of Social Rights (ECSR) is clear on issues related to the funding of social security systems. All of the above enforce that social security contributions must be collectively financed, from contributions by the employers and the employees and/or by the state budget. At international level, Romania is already in violation of the International Labour Organisation (ILO) supervisory system (case number 3182-RO) and of the United Nations (UN) treaty bodies on insufficient funding of the social security system and gaps in coverage.

Together, the trade union delegation called for meaningful social dialogue to engage in discussions on alternatives and denounced the violation of European and international standards on the transfer of social security contributions. By the end of the meeting they agreed on opening discussions for the modification of the Law 62/2011 on Social Dialogue starting from the 5th October until the 5th November. However, no consensus was reached on the transfer of social security contributions to employees.

All Romanian Trade Union Confederations converged on Friday the 6th October in a working group to discuss the issues and find solutions. The principle of shared responsibility of social security contributions is a key element that reflects European social justice and ensures a sustainable European economy. IndustriAll European Trade Union supports its affiliated trade union organisations and urges the Romanian government to listen to the voice of the workers by opening up to meaningful social dialogue to find fairer alternatives.