‘High Quality Vocational Education and Training is key for the future of the MET industries’, reiterate European social partners 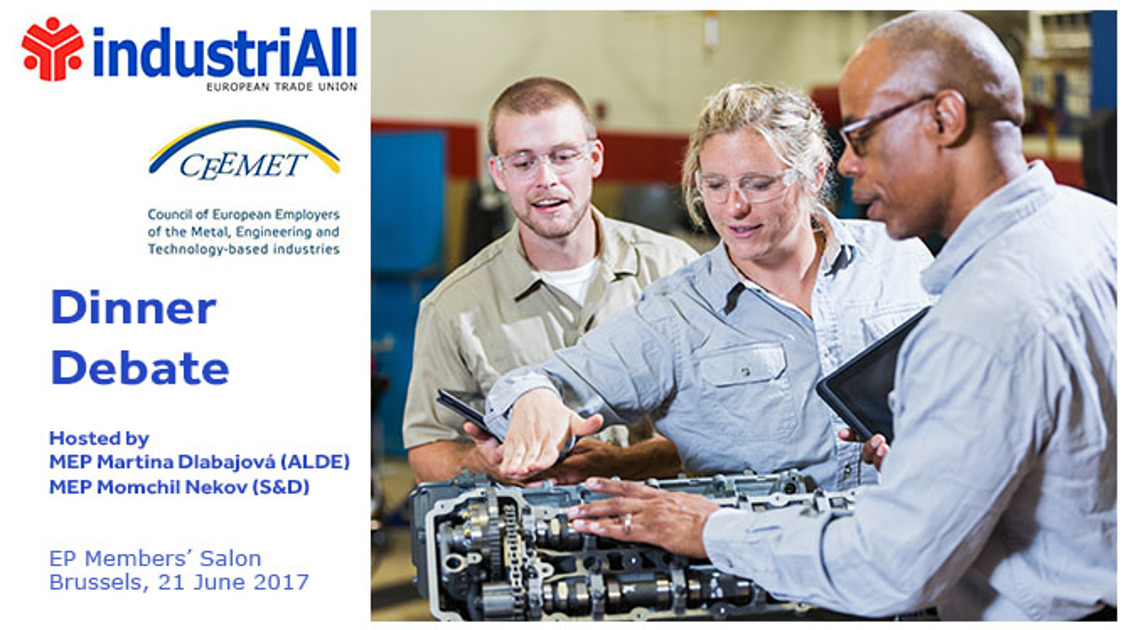 Following the launch of the European Commission’s New Skills Agenda, industriAll European Trade Union and CEEMET - the European social partners of the Metal, Engineering and Technology-based (MET) industries – are uniting/joining forces to repeat their call for swift, ambitious action to be taken in the field of vocational education and training in order to guarantee VET becomes a First-Class option. Prompt action should also be taken to address the lack of digital skills in Europe, so as to ensure the continued competitiveness of the MET sector and the sustainability of its jobs at a time of fast-paced transformation.

IndustriAll European Trade Union and CEEMET have long been advocating for first-class vocational education and training strategies to support the MET industries in thriving in, and adapting to a fast-evolving, highly digitalised world. ‘Ambitious VET policies are essential for companies of all sizes and for workers to keep up with the skills development that is required for the MET sector to remain strong, innovative, competitive and sustainable’ said Uwe Combüchen, CEEMET Director General. ‘Promoting the attractiveness of VET – particularly to young people - as a high-quality training choice, is key to increasing the number of students that choose this option’, he stressed.

The European Commission’s New Skills Agenda initiative has sparked a renewed interest in these topics. Taking advantage of this momentum, on 21 June 2017, industriAll European Trade Union and CEEMET gathered 60 participants at the European Parliament for a high-level Dinner Debate. The event was hosted by the European Parliament’s rapporteurs on the New Skills Agenda, who presented the Parliament’s vision on the issue of digital skills and VET. At the same time, high-level Commission representatives presented the Commission’s initiatives within these two areas. The social partners, participating as panelists, showcased initiatives that they had been developing at national level, particularly in relation to VET and digital skills in the MET industries.

‘The European Commission’s New Skills Agenda is a step in the right direction. It should support social partners’ initiatives in keeping up with skills development, which is becoming a challenge in a fast-evolving world’, said Luc Triangle, General Secretary of industriAll European Trade Union, ‘Also, let’s not forget that for the objectives of the New Skills Agenda to be met, the EU policy on skills must be coupled with ambitious industrial and employment strategies’.

As part of the dinner debate, CEEMET and industriAll European Trade Union also took the opportunity to present their joint position on the Skills Agenda, in which they called, amongst other things, for a responsive VET system that supports the adaptability, autonomy and employability of workers and that guarantees real opportunities to access the labour market throughout their career. Responsive VET systems are also key to helping overcome the current skills shortages that are occurring within the MET industries. ‘Last but not least, industriAll European Trade Union and CEEMET would like to reiterate their call on EU policy makers to ensure that the social partners are involved in the development and implementation of VET and skills policies’, declared Uwe Combüchen and Luc Triangle.

industriAll European Trade Union and CEEMET’s joint position
‘A skills agenda for Europe: no need for New but for Swift action’ is available here.